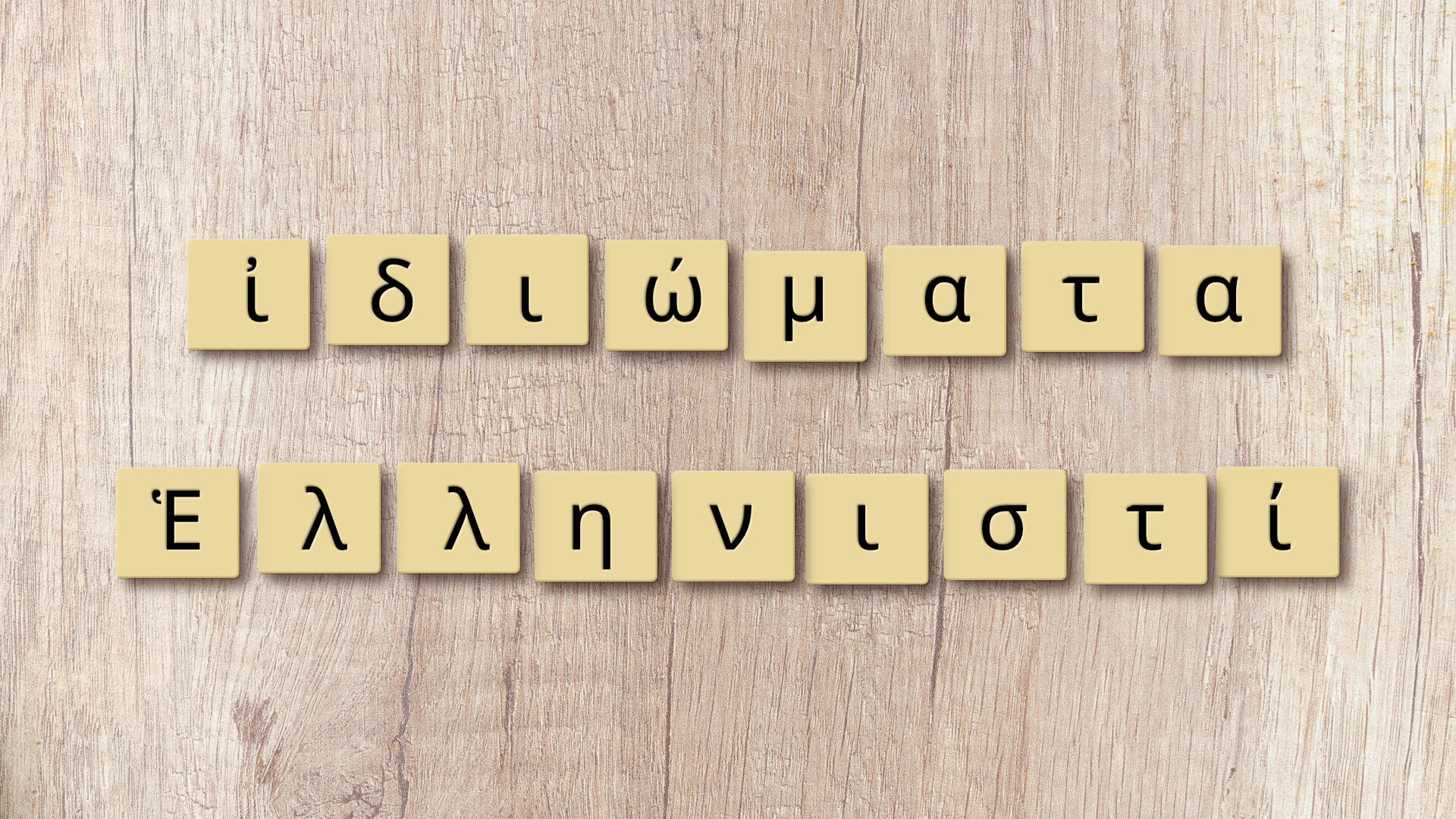 I can talk until I’m blue in the face, and not exhaust the topic of idioms! Idioms have to take the cake for some of humanity’s most colorful means of expressing itself. “But what is an ‘idiom’?” you might say.

Merriam Webster’s defines “idiom” this way: “an expression in the usage of a language that is peculiar to itself either in having a meaning that cannot be derived from the conjoined meanings of its elements (such as up in the air for “undecided”) or in its grammatically atypical use of words (such as give way).”1 That’s a dictionary definition for you. I like this one better: “idioms are sentences that sound ridiculous to everyone but the native speakers who use them.“2

It should be no surprise that the Greeks had their own idioms. A few of them even show up in the Greek New Testament! This post is a little excursion into some of the less obvious idioms that often get “translated away” by English translations, because they wouldn’t communicate the same thing in English.

As an amateur Greek student, I have spent enough time with the Greek language in speaking, hearing, and reading it that I can tell when I see many of these that “this one isn’t necessarily meant to be taken ‘literally'”. What I don’t know, however, is how many of these idioms may in fact be Hebrew idioms that were translated into Greek, and understood by the original readers simply because they knew the Hebrew language and culture. I have attempted to sort out some of the more obvious Hebrew idioms into a separate section below.

As often happens, this post was inspired by reading someone else’s post. In this case, I was reading a post from The Ezra Project, which got my wheels to turning. But, enough of the introductions! Let’s cut right to the chase, and look at some of the most interesting Greek (and Hebrew) idioms in the New Testament!

Here’s the NET Bible note (tn #62) for John 10:24:
“How long will you take away our life?” (an idiom which meant to keep one from coming to a conclusion about something). The use of the phrase τὴν ψυχὴν ἡμῶν αἴρεις (tēn psuchēn hēmōn aireis) meaning “to keep in suspense” is not well attested, although it certainly fits the context here. In modern Greek the phrase means “to annoy, bother.”

Here’s the NET Bible note (tn #30) for 3 John 14:
Grk “speak mouth to mouth,” an idiom for which the contemporary English equivalent is “speak face-to-face.”

Louw & Nida 23.50 makes a brief comment about this, “ἐν γαστρὶ ἔχω (an idiom, literally ‘to have in the womb’): to be in a state of pregnancy — ‘pregnant, to be pregnant.’”

Louw & Nida 23.69 explains: “(idioms, literally ‘their eyes were weighed down’) to become excessively or exceedingly sleepy — ‘to have become very sleepy, to be very sleepy.’” [cf. Mark 14:40]

Louw & Nida 11.7 gives this succinct explanation: “υἱοὶ τοῦ νυμφῶνος (an idiom, literally: sons of the wedding hall) guests at a wedding, or more specifically, friends of the bridegroom participating in wedding festivities — wedding guests or friends of the bridegroom — A literal rendering of the idiom ‘sons of the wedding hall’ has often been seriously misunderstood, for example, the bride’s children born prior to the marriage. (Matt 9:15; Mark 2:19; Luke 5:34)” See also Carl Hagensick’s article in The Herald Magazine.

Here’s the NET Bible note (tn #8) for John 2:4
Grk “Woman, what to me and to you?” (an idiom). The phrase τί ἐμοὶ καὶ σοί, γύναι is Semitic in origin. The equivalent Hebrew expression in the Old Testament had two basic meanings:
(1) When one person was unjustly bothering another, the injured party could say “What to me and to you?” meaning, “What have I done to you that you should do this to me?” (Judg 11:12, 2 Chr 35:21, 1 Kgs 17:18).
(2) When someone was asked to get involved in a matter he felt was no business of his, he could say to the one asking him, “What to me and to you?” meaning, “That is your business, how am I involved?” (2 Kgs 3:13, Hos 14:8).
Option (1) implies hostility, while option (2) implies merely disengagement. Mere disengagement is almost certainly to be understood here as better fitting the context (although some of the Greek Fathers took the remark as a rebuke to Mary, such a rebuke is unlikely).

In Ellicott’s Commentary for English Readers we find this explanation: “with desire I have desired.—The peculiar mode of expressing intensity by the use of a cognate noun with the verb of action, though found sometimes in other languages, is an idiom characteristically Hebrew (comp. “thou shalt surely die” for “dying thou shalt die,” in Genesis 2:17), and its use here suggests the thought that St. Luke heard what he reports from some one who repeated the very words which our Lord had spoken in Aramaic.”

Jim Myers wrote an excellent article called “Those Mysterious Eyes” from which I’ve gleaned some of the thoughts below. The key to understanding the words of Jesus in Matt. 6:22-23 is knowing what the Hebrew Old Testament says about “good eye” and “evil eye”.

Beware that there be not a thought in thy wicked heart… and thine eye be evil against thy poor brother, and thou givest him nought; (Deut. 15:9 KJV)

Here’s the NET Bible note (tn #23) for Proverbs 22:9, which could be the passage Jesus had in mind when he spoke these words: “Heb “good of eye.” This expression is an attributive genitive meaning “bountiful of eye” (cf. KJV, ASV “He that hath a bountiful eye”). This is the opposite of the “evil eye” which is covetous and wicked. The “eye” is a metonymy representing looking well to people’s needs. So this refers to the generous person (cf. NASB, NIV, NRSV, NLT).”

And I guess we’ll wrap it up there for now!