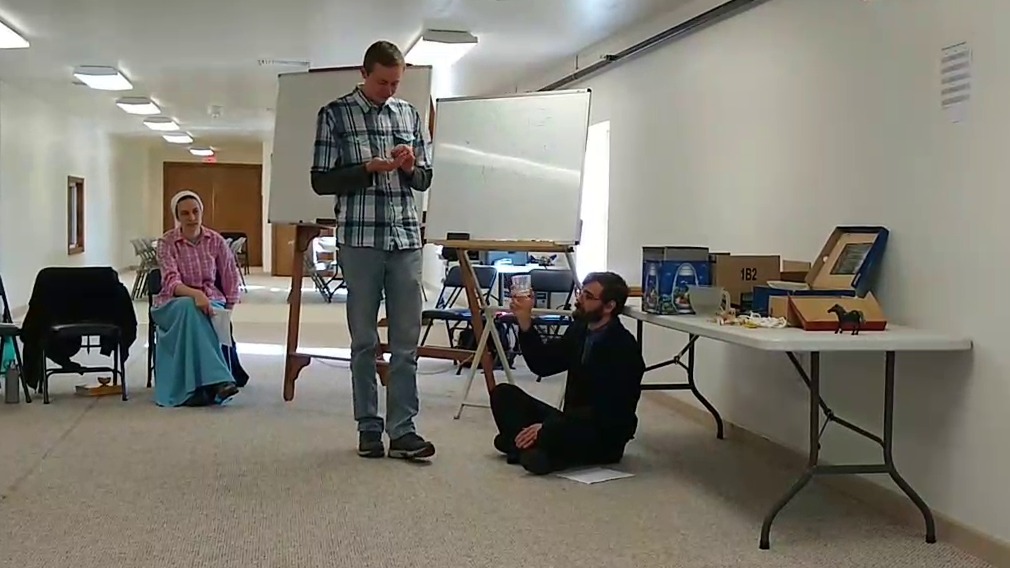 I’m (formally) studying Greek again, after an extended break of several months! This week marks the beginning of a (hopefully) longer foray into the intricacies and vagaries of biblical Koine Greek.

I’ve studied Greek in the past (obviously) using Bill Mounce’s curriculum with video lectures, but the class I am taking now is vastly different (and superior in my opinion.)

Now, you might ask, “What is this class you are taking, and why is it superior to Mr. Mounce’s monologues?” (I might hasten to add at this juncture that I have nothing against Mr. Mounce. I watched him explain Greek charts for many hours, and I appreciate all the effort he put into it. The year of Greek study that I had with him was definitely not wasted!)

But, to answer your question… You can find all the information you need to know about the class I’m currently taking here: https://biblicalgreekprogram.org/ As the website name implies, it is all about biblical Greek. This was proven the very first day of class when we saw, heard (and eventually read) the text of John 5:8 straight from the Greek New Testament!

You might be tempted to laugh at the featured photo above of the venerable Greek professor sitting and begging for coins, but it is all a part of the creative communicative learning process. (Go ahead and laugh — we did!) I have not laughed so much in one day for a very long time!! Think about it… Which are you more likely to remember? A foreign-looking Greek word printed in a textbook, or the same word literally acted out in front of your eyes? (Not to mention that the word gets repeated dozens of times in its various inflected forms throughout the class period). In this case, we were learning the difference between the Greek words for rich and poor, so we could properly understand the story of Zacchaeus in Greek.

That’s the gist of what we’re doing here. No fancy gimmicks, no endless lists of verb paradigms, no mindless mumblings of vocabulary words… Just total immersion into the world of Greek. Literally! You know it’s total immersion when it sounds funny to hear someone speak in English for the first time in half an hour!

From the time we start a lesson until it ends 50 minutes later, the conversation is probably about 99% Koine Greek. No English explanations, no translations needed. The teacher uses hand motions and humor and TOYS (of all things!!) to get his point across. Sometimes we laugh till our sides hurt, and our cheek muscles are stiff from smiling so much; other times we sympathize with the lamb that is about to be eaten by a lion, or the fish that finally gets to swim in water, instead of dangling from the professor’s fingers!

Sad to say, I don’t think I’ve ever truly thought in Greek till I started this class. Sure, I had paradigms and prepositions running through my head as I flipped flashcards and took tests in Mounce’s program. But it was all just an academic exercise that bounced around in my brain for a while before settling into a dim, dusty corner to quietly rust as soon as I put my textbook away for the summer. Obviously, I have not yet had a chance to see whether this class will end up the same way… But I rather doubt it will.

Read the New Testament Without Translation??

BGP’s claim that it will enable you to “read the New Testament without translation” is no exaggeration. We’re only two days into the class, and I’m already beginning to “see” and understand the text in a way that I haven’t done before.

There is a difference between “reading” and “translating” the Greek New Testament, especially if Greek is not your first language. Of course, at first, your mind is always at least subconsciously translating when you read another language, but the goal is to learn that language so well that your brain processes it natively, without having to stop and translate each individual word. I’m not naïve enough to believe that 1 or 2 years of Greek class will do that sufficiently to be called “fluent”, but it will definitely push me in that direction! (See how I slipped in that diaeresis there? 🙂

One of the best parts of this whole experience is the folks that you find yourself fraternizing with! All of them come to class because they want to. (Quite in contrast to some of my fellow-students from my first Greek class.) You know you’re in the presence of “kindred spirits” when the lunchtime conversation-piece is a book from the 1800s written in Latin and Greek, and the after-class discussion centers around textual criticism, manuscript variants, hermeneutics, history, and the inevitable KJV-only discussions. Words like palimpsest, Majority, diaeresis, BDAG, and Byzantine, are bandied about with as much coolness as if we were discussing the brand of chips we happened to be munching on. Needless to say, (but I’ll say it anyway) this Greek geek is in his element!

I’m sorry you missed class this year. 🙁 Hopefully you can sign up for it next time around! Here, I’ll make it easy for you:

Take me to the BEST way to learn Greek!